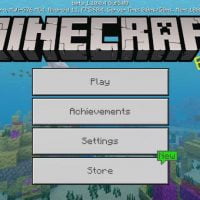 Download Minecraft 1.10.0.4 full version with working Xbox Live for Android: new inhabitants, blocks, mobs, as well as raids of marauders are already waiting for you!

After the release of the first beta of Minecraft PE 1.10.0, it became clear that players will have a varied amount of content in the form of mobs, blocks, and smart residents. Also, the developers have worked on a lot of different bugs.

In MCPE 1.10.0.4, there are two new unique mobs. The first of these is the itinerant merchant. He randomly appears in the world and sells various rare goods, more often dyes.

The second is the destroyer. This is another member of the raid. A large bull-shaped creature has a fairly huge strength. Rogues can ride him, making it harder to kill. Rogue Leader on the Reaver is a deadly combo.

In Minecraft 1.10.0.4, the player has the opportunity to receive hewn wood. To do this, it is enough to hold the cursor on the tree while holding an ax in your hand.  Along with all this, a lot of blocks appeared in the game on which the player can create something:

Also, bushes of sweet berries began to appear in the taiga, eating which restores 2 points of hunger. This, of course, is not enough, but in critical situations, it can help out a lot. It is very convenient to grow bushes.

A completely new system of villagers’ behavior appeared in Minecraft 1.10.0.4. So each villager has their own profession. He will sleep at night and go to work in the morning.

They can also gather at the gathering points to talk to each other. If it rains, the residents will try to find an enclosed space. New villager skins will indicate their profession.