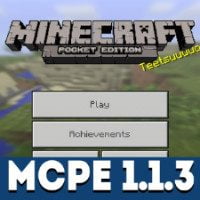 The Nether has changed a bit in this update. It turns out Mojang Studios introduced a few brand new bizarre blocks. Generally, you can find some of them generating naturally in wildlife.

Minecraft PE 1.1.3 also has a plethora of other features like llamas, Vindicators, and explorer maps. Discovering all of them will be quite thrilling for every fan.

First of all, a magma block is quite a marvelous looking thing in MCPE 1.1.3. However, it’s full of vulnerability, too: if you step on it, you’ll get some damage.

It’s simply scorching, so the longer you wait, the more damage you get. Nevertheless, it shines and glistens, so it’ll be an excellent addition to the casual builder’s inventory.

You can obviously find it only in the Nether. Moreover, magma blocks appear near lava — on the lower levels, so you should be precautious in Minecraft PE 1.1.3.

On the other hand, users now possess Bone blocks that make funny sounds once broken. You can find it in the Overworld as well.

There are actual archeological sights in MCPE 1.1.3: dinosaur fossils generate predominately in swamp and desert areas.

Nether wart block does not develop commonly, but you can make one with nine warts. It’s a scarlet-red block that might fit some of your builds.

There’s also Red Nether Block, which is technically just another redder version of a typical Nether Block in Minecraft PE 1.1.3.

Developers could not forget about optimization and technical issues some players experienced before. For instance, this sandbox survival no longer crashes with no point.

Many complained they placed blocks on the old world’s border that led to unexpected accidents.

MCPE 1.1.3 is to fix all of your irritating problems.