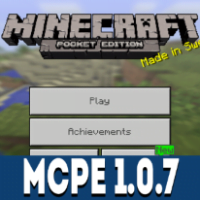 Minecraft PE 1.0.7 already has things like Shulker shells and even Dragon’s Breath. You can these in the End, another dimension players must visit to finish the game.

First of all, Shulkers spawn only in End Cities, which generate in the Outer End a gateway to where opens after you defeated the Dragon. They drop shells one can utilize to make Shulker Boxes.

Besides, these crates differ from ordinary chests: they hold items inside even once broken in MCPE 1.0.7. It’s some sort of a backpack.

There’s another mob in this sandbox survival — Endermite. This mischievous little bug spawns when a player uses an Ender pearl.

They resemble silverfish at some point. Furthermore, polar bears now inhabit barren northern lands in Minecraft PE 1.0.7. You can’t tame them, but these animals won’t attack you, at least.

However, if there’s a cub, you should not get too close to it because adult species shall start attacking you in order to save their little babies.

We also received an additional effect — Levitation. It is applied by the above mentioned Shulkers. Levitation causes you to fly up uncontrollably and eventually fall down and perish.

You can stop the process by either drinking milk or consuming chorus plants, so you would teleport to the ground. Of course, there’s an option with an Ender pearl in MCPE 1.0.7.

Yet, Levitation is also the quickest and most effortless way to get up the End Cities: you’ll avoid all parkour rooms and Shulkers.

Mojang Studios added another way to get tipped arrows. You could previously get them only when using a cauldron, but now you can combine sixteen arrows with a potion.

Minecraft PE 1.0.7 users are free to drink milk and get beetroot with the soup in Creative mode.

On the other hand, there’s an animation for throwing items.