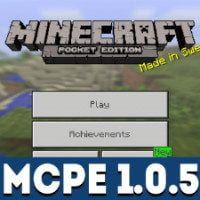 Although this big update is all about the End, its giant challenging boss, and Endermen, there’s also some other exciting stuff to explore.

Minecraft PE 1.0.5 features quite a plurality of mobs and blocks.

Snowy plains and forests of MCPE 1.0.5 have changed a bit since there’s a whole new dungeon that can spawn within those vast and barren lands.

It’s an iglooWhaw. It looks quite like a real one: an igloo is made of snow, has a carpeted floor inside, a workbench, and a furnace.

You might think this is all it’s got, but you will most likely be mistaken. There’s a fifty percent chance for a secret lab to spawn in Minecraft PE 1.0.5.

That’s where all the mysterious and intriguing part begins. It seems there was a fine lab once. There are two cages with a zombified and an ordinary villager inside.

A completely not suspicious brewing stand is right next to them that unintentionally indicates a few terrible experiments were held here.

You can get several iron bars and the table, of course, but there is also an tiny unremarkable chest in the lab in MCPE 1.0.5.

Mostly empty taigas and tundras also received a new mob to their Bestiarium. A polar bear keeps spawning here henceforward. They are neutral most of the time.

Nonetheless, if you spot a cub near a polar bear, do not come close to them since adults shall start to attack you, protecting its offspring in Minecraft PE 1.0.5.

An exasperated bear is a horrid sight: it rises on its back feet to make a powerful strike. However, if there’s no cub, you can come right over the bear’s face.

They drop fish and some string once killed, but don’t you do it: bears are endangered in the real world, so let them thrive in MCPE 1.0.5 at least.