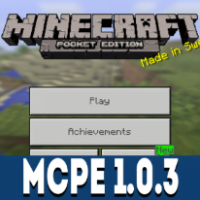 Download Minecraft PE 1.0.3 Ender Update for free on Android: enormously potent final boss of the game, multiple unique-looking blocks, and a variety of other features.

All Minecraft PE 1.0.3 players worldwide are now on an official spree to hunt down and eliminate the Ender Dragon. This mischievous beast has held captive an entire realm for too long.

The Dimension, ironically called “End,” is the place full of despair and slender Endermen that are craving to kill you. One should wear carved pumpkins to avoid the fight.

Furthermore, players should bring some water buckets, so if the Dragon pushes them into the purple skies, they can land on soft water in MCPE 1.0.3.

However, Minecraft PE 1.0.3 is not entirely about the End: there is a new dungeon in the Overworld. Igloos generate exclusively in snowy biomes like taiga and tundra.

However, the latter contains them the most. There are actually two types of this building: with and without a lab underneath it.

Its spawn rate fifty by fifty. The upper level of an igloo is quite an ordinary place with nothing so special. There is a workbench, a furnace, and a bed.

On the contrary, the lab contains a precious brewing stand and two chambers in MCPE 1.0.3. There are zombified and ordinary villagers. Therefore you can cure one.

There’s also a chest with some handy stuff.

Minecraft PE 1.0.3 also features a few unique items: elytra, for instance. This item can be found in the End ship where Dragon Head is located too.

One who possesses elytra can glide the air and reach any surface point in a few seconds. Generally, elytra ease your gameplay many times.

Obviously, only the Ender Dragon produces it in MCPE 1.0.3.