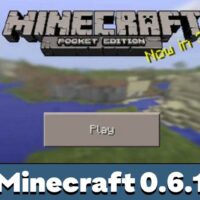 The Mojang studio team has released the alpha edition of Minecraft PE 0.6.1. In this version, the developers have focused on correcting accumulated errors. In addition, there were baby creatures, new blocks of the Nether world and signs.

The presented game edition is supported on the Raspberry Pi mobile platform.

In Minecraft PE 0.6.1, the variety of construction blocks from the Nether has been significantly updated. From now on, users can mine the Nether stone bricks and Quartz, and build a lot of different constructions.

To craft th Nether bricks in Minecraft 0.6.1, Steve has to overcook the Nether stone. Then this material can be used in the Crafting Table to create full-fledged building blocks.

The developers of Minecraft PE 0.6.1 have brought a previously unseen variety of fauna creatures. These are the cubs of mobs that did not exist in the game before. Despite the appearance of this type of creatures,the breeding system has not yet been implemented.

In Minecraft PE 0.6.1, the mechanics of the signs, which appeared in previous versions, were also added. Absolutely any text can be written on these items, which will be extremely useful to the authors of various adventure maps.

It is also quite easy to sort items in the warehouse in survival mode using these signs.

The main focus of Minecraft 0.6.1 development is focused on fixing bugs and flaws of past releases. Thanks to the work done, users will not face the following problems: