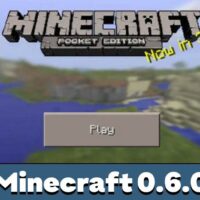 Download Minecraft PE 0.6.0 for Android: get to know the cubs of mobs, signs and new Nether Bricks.

Mojang Studio developers have released a large-scale Minecraft 0.6.0 update. In this version there are cubs of mobs, new Nether Bricks and work signs. The control system has also been significantly improved, and the appearance of the sky and fog has also been updated.

To launch the game successful, you need Android 2.3 or newer operating system.

In Minecraft PE 0.6.0, developers have implemented the long-awaited cubs of mobs. Now they can be found quite easily in the vast world of the game. However, it is still impossible to breed creatures, because this function will be added only in the future.

In addition, sheep now look different and can be painted in different colors using dyes.

If Steve kills cows, from now on, the skin falls out to create many other items.

Also, Minecraft 0.6.0 presents users working plates, which are an important part of the gameplay. These items are especially important to the maps creators . After all, they can write the plot of the location on them or make convenient pointers out of them.

The signs will be useful to ordinary players in survival mode, as it is very easy to organize a warehouse with their help.

Mojang Studio has presented in Minecraft Pocket 0.6.0 quite new and useful Nether Bricks for construction. From now on, quartz and bricks from the Nether are available to users. It is also possible to make steps from these blocks in the Crafting Table.

By the way, in the creative mode inventory there are Blocks of Quartz and a great variety of the carved stone bricks. Mossy and cracked stone bricks are also available there.

To create a nether brick, Steve will need to melt the Nether stone in the oven. Further, it is very easy to get full-fledged blocks from this resource, which will be useful for various buildings.