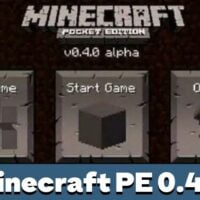 Download Minecraft 0.4.0 for Android: get acquainted with creepers, hoes for beds, and new blocks.

The edition of Minecraft PE 0.4.0 brought famous creepers that explode at the sight of the player. Mojang Studio has also added many new blocks and items.

The peaceful complexity of the game appeared in this version. When it is turned on, all aggressive creatures disappear from the world.

The developers have added one of the most famous mobs to Minecraft Pocket Edition 0.4.0, which is rightfully considered a creeper. These creatures will appear in the daytime and at night. At the sight of users, mobs begin to sneak up on them, and after a few seconds, they explode.

In addition, creepers can cause damage not only to players but also to all buildings. For this reason, it is recommended to illuminate the entire territory of the dwelling well with torches. After all, hostile creatures of the blocked world cannot appear in a very bright place.

Also in the Minecraft PE 0.4.0 version, previously unseen items have been added. Among them, hoes for digging beds stand out, as well as wheat and animal meat. Raw flesh should be cooked in the oven before use, so as not to get a negative effect.

To extract a large number of wheat seeds, a hoe should be used on blocks of turf.

In Minecraft Pocket Edition 0.4.0, the amount of building blocks has significantly expanded. Now users will have much more opportunities to bring to the blocked world their creative potential. The new materials for buildings include the following blocks:

By the way, white wool can be dyed in different colors. After all, the developers have brought as many as eleven dyes to the game.

The bed in the new update is used to skip the night. It can be made in a Crafting Table of three blocks of wool and wooden boards.