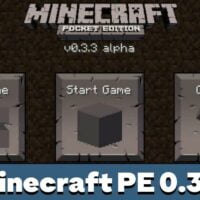 Download Minecraft 0.3.3 for Android: play on your phone, try archery, grow trees and light the area with torches.

On August 9, 2012, the developers of Mojang Studios released a new version of the game update – the Minecraft Pocket Edition 0.3.3. This time, a lot of items have been introduced into the game, including even a unique camera for the new update.

Among the new items that appeared in Minecraft PE 0.3.3 are feathers, flint, as well as a bow and arrow. All these items are interconnected.

The bow is crafted from sticks and threads. To make arrows, a player will need all the same sticks, flint, and a feather.

There is a camera in the game that will help users to get an inventory editor. For example, PocketInvEditor.

In Minecraft Pocket Edition 0.3.3 various types of mobs have also been added. In survival mode, both friendly and hostile creatures roam the cubic world.

A cow and a chicken are harmless, they walk next to already existing pigs and sheep.

If the player kills them, he gets the meat of the corresponding mob. There are even more hostile mobs now. At night walking around the blocked world Steve can find spiders and skeletons, they hunt players along with zombies.

Spiders do not attack during the day and do not touch anyone if a player does not disturb them.

The most important part of the entire Minecraft PE 0.3.3 update is the appearance of a drop. Killing other mobs by the player leads to a drop.

Usually it is meat or bones, from which bone meal is then made.

The Mojang Studios team has also added to Minecraft Pocket Edition 0.3.3 some types of resources.

Ore became easier to mine, it became possible to melt ores.

Now players can mine and process 5 types of ore: