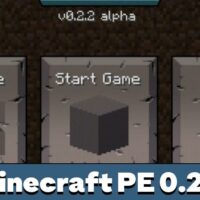 In the new version of Minecraft Pocket Edition 0.2.2, developers have added a variety of functions to the game world. The player will also be interested in the new mechanics of day and night, stone tools, and game modes.

In the updated version of Minecraft PE 0.2.2, survival and creative modes have become available to the player.

In survival mode, the player can be killed at any time. Steve will have to show cunning and courage to survive in difficult conditions. Collecting blocks, food supplies, hunting mobs of the animal world and much more will help the player not to die in the famous sandbox world.

It is impossible to die in creative mode. Hostile mods will no longer harm the character. In this mode, a player can endlessly use any resources of the game. Items in the inventory will always be available.

There are only three main mobs in the game: sheep, pig, zombie. All mobs in creative mode are available for creation. Sheep and pigs are friendly creatures, freely walking around the world of Minecraft PE 0.2.2.

The main feature of Zombies is that they appear in the game only at night. They are very hostile to the player and try to harm him. Steve needs to be careful.

The updated version of the game Minecraft PE 0.2.2 adds a new block called the bookshelf. The block has no special functions. It can be used as a decoration in the construction of houses. The developers of Mojang promise to add more and more new items to inventory with each update.

Also, the developers from Mojang Studios have not forgotten about the introduction of small changes in Minecraft Pocket Edition 0.2.2. They fixed bugs leading to crashes on various devices and those that prevent the game from starting.