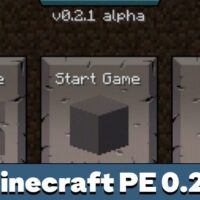 Download Minecraft 0.2.1 for Android: try new mechanics of interacting with the blocked world, meet amazing creatures, use new building blocks, and much more.

Now the player has 2 game modes available in Minecraft PE 0.2.1. Survival is a mode in which the player can die, the main aim of the game is mining blocks on their own, hunting, and food extraction.

Creativity is a mode in which all objects are infinite and available at once, it is impossible to die. Blocks break instantly.

Living creatures appeared in the game, they are commonly called mobs. Sheep, Zombies, and Pigs appeared in Minecraft Pocket Edition 0.2.1.
A player can summon mobs in creative game mode or find them in survival mode while walking around the world.

Sheep and pigs in the blocked world live on the surface during the day, but zombies come only at night to attack from the shadows.

In the creative mode of Minecraft PE 0.2.1, the user has the opportunity to use a new block called a bookshelf. This is only a decorative block, it does not carry any functionality.

Sugar cane from this version is an infinite resource and cannot be harvested.

The development team from Mojang Studios did not forget about the introduction of new tools. Among them, a Minecraft PE 0.2.1 player can find stone picks, axes, swords.

Despite the fact that Steve can even get an item with his hand, it is better now to use a suitable tool from the inventory box. Also, as a bonus, scissors for destroying foliage and shearing sheep appeared in the game.

To get wool from a sheep, Steve will have to use scissors and clamp them on the mob.

In Minecraft PE 0.2.1, the player can choose the mode for generating the world. An alternative control scheme for large-screen tablets has also been added. And the developers also fixed an error in which the game did not open on some devices.