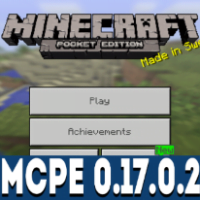 Download Minecraft PE 0.17.0.2 Ender Update for free on Android: ginormous location with a giant dragon and hundreds of Endermen.

Minecraft PE 0.17.0.2 features a whole variety of unique things, starting with in-game music and finishing with an epic fight with a dragon.

This major overhauled has changed quite a lot when it comes to Overworld generation. First off, worlds have become higher: their building limit doubled from 128 to 256.

It means anyone can now build twice as epic as before with no problems whatsoever. On the other hand, Strongholds now appear in MCPE 0.17.0.2.

It’s a hidden place where you can get only using an Eye of Ender. These fortresses are enormous in size, denoting you’ll spend a lot of time lurking and rummaging it all.

Mojang Studios also released the Festive 2016 Mash-Up Pack you can download from Marketplace. Still, when you sleep a rainy night over, it stops drizzling in the morning, as requested by many caring users.

Another game-changer comes with MCPE 0.17.0.2: one is now free to combine two broken items into a fixed one.

As you all know, if any beast dies by itself, it does not drop experience. Yet, it also worked with tamed dogs, which was unfair. It changes immediately.

Minecraft PE 0.17.0.2 makes dogs share the experience with their masters, making them even lovelier than ever before.

Besides, there is a plurality of mob-related tweaks in this beta version. For example, the Wither no longer attacks Wither skeletons and strays.

They had been dying in water prior to this date.