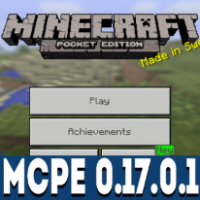 This major update is about to fix many yet unresolved features and add more. For example, Minecraft PE 0.17.0.1 has in-game music, which is an excellent addition to all fans.

The game was previously silent since its soundtrack was too heavy. However, developers added an option to download it separately on your device.

Therefore when one installs this sandbox survival, there’s going to be no music at all. You should now open Marketplace and find the needed pack and eventually download it to your MCPE 0.17.0.1.

Furthermore, authors from Mojang Studios announced new achievements to come with this overhaul. It indicates you’ll have more challenges to beat and discover.

On the other hand, worlds created in Minecraft PE 0.17.0.1 are now predominately higher than old ones.

It seems developers increased world height giving the most creative builders more space to express themselves.

MCPE 0.17.0.1 evidently has three unique and completely different creatures. Polar bears live in snowy biomes and are mostly neutral unless when having a child.

On the other hand, Shulkers dwell in the End Cities. They shoot enchanted projectiles applying Levitation on uncautious users.

Yet, the most giant mob in Minecraft PE 0.17.0.1 is the Ender Dragon. An enormous monstrosity reigns the End and has 200 HP.

You’ll have to kill it ultimately since it’s the main boss of the game in Minecraft PE 0.17.0.1.

Mojang Studios could not leave aside the technical part of MCPE 0.17.0.1. Subsequently, we have several adjustments meant to solve the most meddlesome issues.

For instance, you can no longer fall from a heigh and reopen the world to discard the fall damage. Many cheaters used it, but it’s no more.