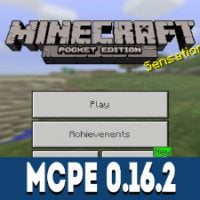 Download Minecraft PE 0.16.2 Boss Update for free on Android: two brand new epic bosses with epic loot like a Nether Star, which is used to make a beacon.

This overhaul is called Boss Update for a reason. Mojang Studios added two wholly unique and challenging bosses in some way in Minecraft PE 0.16.2.

This boss can be found at the bottom of the ocean: the Ocean Monument is his lair. The place mentioned earlier is protected by numerous guardians.

This one-eyed fish has a long tail and a giant orb that shoots lasers. Guardians shall try to stop you, but there’s always a way to get through them in MCPE 0.16.2.

For instance, you don’t actually have to combat them: simply swim past them without engaging in confrontation.

However, remember that guardians can spawn inside the monument: they do it less frequently. Moreover, there are a few Elder Guardians, apparently.

Therefore you must keep conquering this location, even after the first Elder died in Minecraft PE 0.16.2. All these mobs drop prismarine crystals and shards.

As a matter of fact, users may find sponge filled rooms in the marine temple. You are obviously free to collect all you see, but Mining Fatigue won’t allow you to do it unless you’ve killed the Elder.

On the other hand, Wither is more related to scorching and lava-full Nether.

You can get those, but it’ll take you a great deal of time since its drop chance is teensy. Users should visit this dimension with the Looting enchanted sword.

Otherwise, you’ll have to slaughter hundreds of skeletons. Once you’ve collected all of the three required skulls, build a T-shape structure out of soul sand in Minecraft PE 0.16.2.

When the Wither is out, an explosion will blow, and the battle shall start. Once slain, it’ll drop the Nether Star players may use to make a beacon.