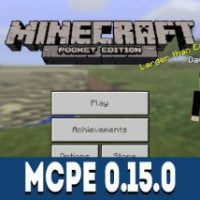 Mojang Studios is ready to show off its next major update for the beloved sandbox survival game. Minecraft PE 0.15.0 features a variety of unique features with transportation systems and more.

First of all, Redstone engineers are finally happy since pistons have made it to the game. This trickster-looking thing is a very hand tool in reality.

It turns out the most intelligent users will be able to move blocks wirelessly. All you need is some extra Redstone in MCPE 0.15.0.

However, it’s not as easy as you might have guessed. There are generally two types of pistons. An ordinary one can push the block ahead of it.

On the other hand, a sticky piston can push and pull the block back too. It’s a handy contraption to have, mostly when building something reusable like gates or a door.

Minecraft PE 0.15.0 players are free to assemble it out of wooden planks, an iron ingot, and cobblestone.

This massive update also has a carrot on a stick, and it is actually a tool: you can mount and ride pigs henceforward. Moreover, sheep now drop mutton when killed.

On the contrary, a fire charge can be found in the Nether fortresses of MCPE 0.15.0. You can also craft it by yourself. Since there are horses in the game, there are got to be horse armor as well.

Besides, the best way to keep an eye on your beloved animal is with a lead. You can tie them up to a fence. Furthermore, users are likewise able to give them names.

A name tag generates randomly in chests throughout the updated world of Minecraft PE 0.15.0.

You can find lead there too, but one can also craft it with slime balls and strings.