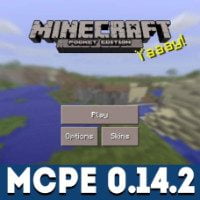 Mojang Studios keeps working hard, delivering the best gaming experience to players. Minecraft PE 0.14.2 focuses on the technical aspects of the games in the first place.

For instance, boast now appear exactly where users put them. It was a big problem, especially during a stern chase. Generally, this update is to resolve all known issues.

First of all, MCPE 0.14.2 features witch huts, locations generating in the swamp area. You can find there a new block. It’s a cauldron that you could already get in the Java Edition.

However, this version’s exclusive highlight contains a random potion, so if you have an empty bottle, you can scoop some and drink it straight away.

Usually, witches do not spawn in their huts, so one can effortlessly explore this place.

Nonetheless, sometimes they do show up, so you should be ready just in case in Minecraft PE 0.14.2.

As a matter of fact, there are actually more achievements to complete, meaning there are more reasons to come back to your old world.

MCPE 0.14.2 also has new sounds for witches. They now sound more devious and evil than ever before. Moreover, a camera block has been added once again.

You can’t use it either in Creative or in Survival; thus, it is useless for the time being. Furthermore, Minecraft PE 0.14.2 got slime blocks. They are evidently made of nine slime balls.

If you want to make one, you should definitely visit the swamps.

Slimes appear there most of the time. Maybe, you’ll even find a witch hut.

Notwithstanding, this place is perilous, so you should be ready to encounter not only slimes and witches but other mobs as well.