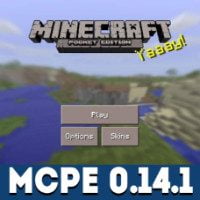 Mojang Studios finally introduces witches to its sandbox survival. You’ll encounter these nasty old ladies in swamps or anywhere else in the world.

You should pay attention because witches tend to throw poisonous and harmful potions at you in Minecraft PE 0.14.1. However, there’s always a way to kill them.

Beware, though: once they take damage, witches heal using their restorative potions. You must act quickly and decisively.

When you kill one, they drop strings, sticks, sometimes Redstone, and other alchemical ingredients in MCPE 0.14.1.

This update is mostly about Redstone blocks. It turns out developers added a whole variety of structures vital to all contraptions you are about to build in Minecraft PE 0.14.1.

For instance, repeaters can strengthen up your signal, and comparators are able to count ticks and do other crucial mathematical stuff.

On the other hand, we’ve got dispensers and droppers throwing out or dispense items that are inside. Generally, it’ll change your interior and exterior in MCPE 0.14.1.

One can set up a bathroom or build a fridge that dispenses lemons and stuff.

There are some notable changes in Minecraft PE 0.14.1 you must know about. First of all, there are more achievements to beat.

Moreover, you can now put on armor in Creative, and one will also keep his inventory switching between modes.

More notably, there’s a new main menu showing out in MCPE 0.14.1. It has an entirely new UI that’ll help you navigate.

As a matter of fact, players are free to wear pumpkins and mob heads as helmets straightaway. Besides, leather armor is now dyeable.

However, you’ll need a cauldron: it’s another fresh-looking block one will get out of seven iron ingots in Minecraft PE 0.14.1.