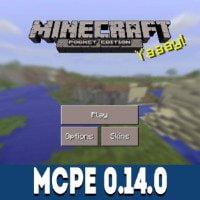 This update is a milestone for sandbox survival development since it changes many of the game aspects.

For instance, there are minecarts and multiple game-changing blocks related to Restone. Minecraft PE 0.14.0 users have more possibilities in the engineering branch.

First of all, comparators and dispensers are out there able to be crafted. Both of these items play a vital role in various contraptions, especially a comparator.

It allows you to strengthen up your Redstone signal and much more in MCPE 0.14.0. On the other hand, a dispenser exempts and throws away stuff that is inside.

You can build an automatic warehouse or set up a fridge. Minecraft PE 0.14.0 also features droppers and hoppers. The latter collects and arranges items that are placed above it.

Yet, a dropper acts similarly to a dispenser, but there is a significant difference here. A lava bucket put inside of a dispenser would be poured if activated.

Nonetheless, the same one in a dropper would simply dispense the exact bucket of lava without pouring it over.

MCPE 0.14.0 additionally introduced extra minecarts. There’s one with a chest storing your precious diamonds and coal. A minecart with TNT obviously explodes once activated.

But the hopper one can collect items near it filing them inside. Furthermore, the Overworld Update has maps forthwith.

One uses them when one doesn’t want to get lost. It’s made of nine paper sheets. Besides, players are free to make slime blocks in Minecraft PE 0.14.0.

If you jump down from the height on them, you’ll bounce back. It works nearly like a trampoline. Devs presented the Camera block that once again has no functionality whatsoever.