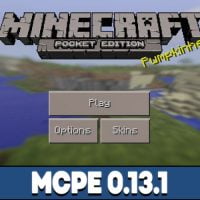 Download Minecraft 0.13.1 for Android: many blocks and items, as well as a new dungeon, await users in the game!

In Minecraft PE 0.13.1, the developers from Mojang Studios, first of all, paid their attention to fixing bugs. They also did not forget about the innovation, of which there are quite a few in this update.

The only new mob of the Minecraft PE 0.13.1 update is the rabbit. These cute creatures are found in many biomes, but they are especially active in the desert. Rabbits, like horses, have different colors. Those who live in the desert are yellow. In the taiga or tundra, they are white, and they are all brown on the plains.

While hunting for rabbits, users in Minecraft PE 0.13.1 will be able to get rabbit meat, a rabbit’s paw, and its skin. The meat, of course, can be fried. Rabbit’s foot is needed to brew various potions on the cooking rack.

Generation in Minecraft PE 0.13.1 has also undergone some changes. So, for example, all in the same desert, you can find a pyramid. The pyramid in the desert consists of two towers and a hall with a secret passage.

Going downstairs, the player will find treasure chests. There may be diamonds with emeralds and rotten flesh with bones. But you should beware of this room, as there is a trap with many dynamites here.

In Minecraft Pocket Edition 0.13.1, the missing redstone-related blocks have finally appeared. First of all, it is worth noting lamps that shine noticeably brighter than a torch but at the same time require a red dust signal. Also, a trapped chest appeared in the game, upon opening which a redstone signal is given.

Additionally, the player can spot red torches, levers, pressure plates, and even a daylight sensor. And finally, in Minecraft PE 0.13.1, there are musical blocks with which players can create music right in the game.