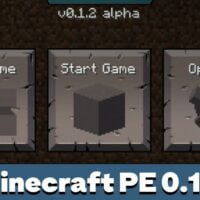 Download Minecraft 0.1.2 for Android: play on your phone using different blocks, biomes, and mobs, exploring all the features of the game.

Minecraft Pocket Edition 0.1.2 is one of the very first versions of the cubic world for a cell phone. The Mojang team has made small, but significant changes in the game. By the way, from this 0.1.2 version, the game became available also for iOS platform users.

The main menu of the Minecraft PE 0.1.2 game is quite primitive, it has only three buttons. But they do an excellent job with their functionality.

The following standard options are available to players in this version: settings, single-mode, multiplayer.

The developers have added additional blocks for construction to the Minecraft Pocket Edition 0.1.2. There was land, sandstone, bricks, glass, and some other resources for buildings.

Interestingly, it was possible to find iron, ore, and cactuses inside the game files. But at that time they had not yet been officially added.

It is worth mentioning, that any blocks of Minecraft PE 0.1.2 are installed and destroyed everywhere, in this sense, the game is an endless field for creativity.

The world of Minecraft Pocket Edition 0.1.2 is randomly generated and has restrictions on the territory. Of course, the landscape in this version is far from modern versions, it is quite sparse, and there are many flaws in it.

This feature of generation is easily explained, these were the first stages of the development of Minecraft PE 0.1.2. Further, with each update, the cubic world gradually improved. Minecraft PE 0.1.2 has a few more useful features.

The developers have implemented the ability to see the gameplay from a third person. In addition, a mirror layout option has appeared for left-handers. In this version, it became possible to disable sounds inside the game.