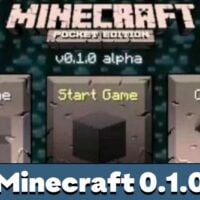 Download Minecraft 0.1.0 for Android: use explosives to clear the area of blocks very quickly.

Minecraft 0.1.0 implements the most important and necessary functions that will be useful to players in survival game mode. The modes are under development, Steve can just explore the map looking for something interesting.

The Mojang developers of the blocked world tried to add basic content. So, the Minecraft PE 0.1.0 players will definitely not get bored, thanks to the opportunities that have appeared.

The generation process in Minecraft Pocket Edition 0.1.0 is also still being finalized. While the world has clear boundaries, it is not possible to go beyond them. Therefore, when exploring the map, sooner or later a user will find the end.

One thing the update has a great advantage. It is the possibility of a multiplayer game. However, the competition can only take place over a local network.

Minecraft PE 0.1.0 presents a huge number of new blocks. The total number of added objects reaches 36. Among them, there are all types of wool, sugar cane, land, steps, stone slabs, cobblestone, and wood.

Each of the blocks can be extracted and put on the surface. At the moment, this is the only functionality that a player is able to use in Minecraft Pocket Edition 0.1.0.

Ores will also be generated throughout the map. The main resource is iron. Later, the material will be used in many crafting recipes, including weapons, armor, tools. In Minecraft PE 0.1.0, ore cannot be crafted, it just helps to diversify the world landscape.

Steve will not be able to get TNT in a natural way. However, explosives are already available in the inventory of Minecraft Pocket Edition 0.1.0.

The block will be very useful if it is needed to clear the territory immediately. The explosion will break the upper levels of the map and a small crater will appear on the ground.